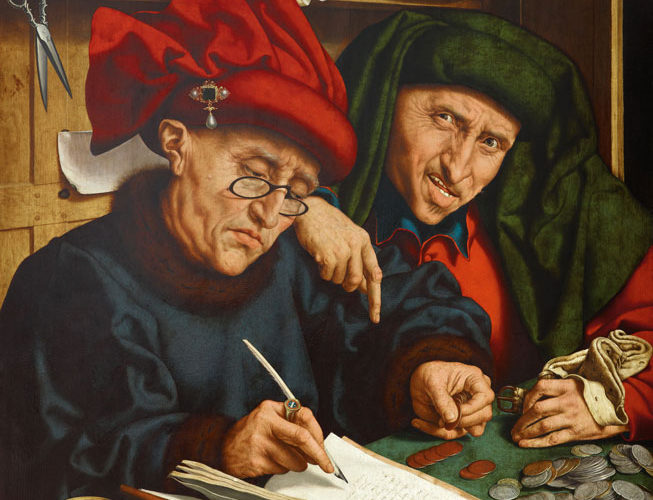 Money of Account: How Commerce was Conducted in the Middle Ages

How did merchants deal with the bewildering array of currencies that circulated in the Middle Ages? The Venetian grosso, Byzantine hyperpyron, French livre, Florentine florin—all circulated widely, yet all had different values and subdivisions. How did they make sense of it all? They used a concept called money of account.

Money of account is a fictitious denomination, defined relative to existing coins. All through the Middle Ages and Renaissance, Europe followed the old Roman monetary divisions of pounds, shillings, and pence (libri, solidi, and denarii)—twenty shillings to the pound, twelve pence to the shilling. Most states did not issue coins in these neat divisions, however; typically, they only minted some low-value coins, and possibly a shilling.

It was cumbersome for merchants to write larger contracts in terms of small coins, however, so they simply wrote them in pounds, shillings, and pence. Pounds (and often shillings) in this case were money of account, equal to some fixed number of smaller coins (e.g. 240 pennies). For example, a number of Italian city-states minted silver coins called the soldo, or shilling. 20 soldi therefore equaled one lira (pound); a contract for £1. 3s. would be payable as 23 silver coins.

The value of money never remained constant, however. Governments constantly debased the currency, which changed the relative value of their coins. In these cases, it was usually the smaller coins that defined the money account. For example, the Venetian silver grosso was originally worth 24 piccoli (the Venetian penny)—two shillings—when it was introduced in 1193. As the piccolo was debased, the value of the grosso increased in nominal value—25 pence by 1231, 27 by 1265, 32 by 1282. In other words, the value of the grosso increased from two to three shillings in less than a century. The coin itself remained unchanged—it was the money of account that lost value.

The changing value of local currencies created problems when it came to international trade. Every kingdom, city-state, and principality had its own money of account that maintained a different value. As Europe underwent a commercial revival in the 12th century, many states tried to solve this by issuing larger denominations for major transactions—often these were gold coins originally valued at one pound. The most popular of these was the gold florin, introduced by Florence in 1252, which contained enough gold to equal twenty silver soldi. The new coin proved extremely popular. It had a high gold content and the Florentine authorities kept the gold content unchanged, so it became the preferred currency for international trade.

The effect of this reliable money was that it created a new money of account. Contracts were drawn up all over Europe that specified values in florins, yet which were payable either in florins or local currency. In such cases, the contract would fix the exchange rate between local money of account and the florin. An example is this collection of contracts for Renaissance artists:

And all these things for the price of ninety florins, at four pounds the florin, in Sienese money….

For all this they have agreed to pay 150 florins, at the rate of five lire five soldi the florin.

This gave foreign merchants a common reference point with which to understand local prices, easing the flow of commerce.

The use of money of account lasted as long coins derived their value from the content of precious metal. Once European states began issuing paper notes, redeemable for a specified quantity of gold or silver, it became possible to issue fixed divisions of a currency. International trade became simpler, as prices only depended on exchange rates between national currencies.