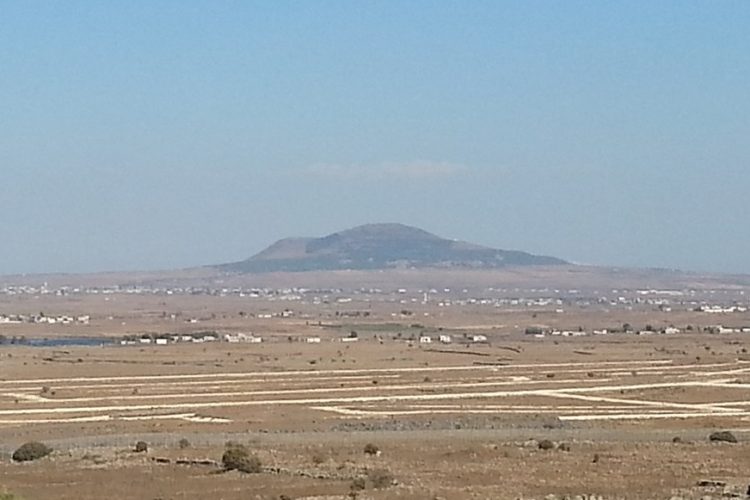 What Is the Hauran? A Small Region of Major Importance

Photos of the eastern Mediterranean from space present an image of sharp contrasts. The coastal plain—just a few dozen kilometers at its widest—is a verdant strip, hemmed in by the coastal ranges and irrigated by the region’s winter rains. The mountains in turn cast a rain shadow on the interior: green vegetation and white snowcaps rapidly give way to tawny deserts that extend far to the east. About a third of the way up the coast, however, a greenish-brown smudge juts out far into the Syrian Desert. This area is known as the Hauran, and it has played an important but understated role in the history of the wider region.

Two distinct geographic features make the Hauran unique. The first is the extinct volcanoes that stud the landscape. Ancient lava flows spread over a wide area, giving the soil a high concentration of mineral-rich basalt. The second defining feature lies outside of the region entirely. To the northwest are the Lebanon Mountains, the highest of the coastal ranges; to the south are the Jordanian Highlands, which run parallel to the River Jordan and the Dead Sea. Between them is a gap, the Golan Heights, that funnels moist Mediterranean air far inland, watering an area over a hundred miles from the coast. The rainfall on such fertile soil makes the desert bloom, an improbable island of green amidst the wastes.

Where crops can grow, humans will settle. The Hauran has been inhabited by farmers since the Bronze Age at least, and quickly became a major agricultural region. Although it produced the grain and wine that fed much of the Levant, it was never especially important as a center of political control. The Hauran’s significance lay more in its location between Syria and Egypt, Arabia and the Mediterranean: it was the connective tissue that tied the wider region together.

There have traditionally been two routes between Egypt and Syria. The first follows the coast, passing through the desert between the Nile Delta and Gaza, then cuts across Judea and followed the road to Damascus. The second heads due east from the Nile, cutting across the Sinai to the Gulf of Aqaba, where it turned north to follow the Dead Sea Rift, the basin formed by the junction of the African and Arabian tectonic plates. This route, known in antiquity as the King’s Highway, was the major artery of trade in the ancient Near East. It is about 450 miles from the Nile to the Hauran’s southern edge, a three-week journey by camel.

There are a number of watering points along this segment that can sustain a high volume of caravan traffic, but no abundant sources of food. The King’s Highway extended from there to the Euphrates, ultimately connecting Egypt to Mesopotamia, the two great centers of Bronze Age civilization. Without a stop-over at the Hauran, the mid-point between the Nile and Euphrates, Bronze Age states could not have maintained the level of exchange that made their civilization so complex.

Another important route crossed through the Hauran: the incense trade from southern Arabia to the temples and later churches of the Mediterranean. After a long and difficult journey up the peninsula, caravans passed through the Hauran on the their way to the Syrian interior or the mercantile cities of the coast. The Nabataeans, the great masters of the incense trade in the first centuries BC, extended their control over the region for just that reason. Their capital of Bosra still contains a number of fine Nabataean and later Roman monuments that testify to their wealth.

Besides trade, war is the other great factor that defines international relations; here too the Hauran played an outsized role. Its capacity to sustain large concentrations of animals made it a natural mustering point for armies, dating at least as far back as Shalmaneser’s invasion of the Kingdom of Israel. During the Crusades, Saladin gathered his army there before his great 1187 invasion of the Kingdom of Jerusalem that culminated in the Battle of Hattin.

The complexity of the world means that the factors which define it are subtle. Small and seemingly unimportant details have influences that reach far beyond their apparent significance. The Hauran, an area mostly unknown to people outside the region, is the quintessential example of this. Although unremarkable except for its geological features, it has quietly shaped the wider world for thousands of years.