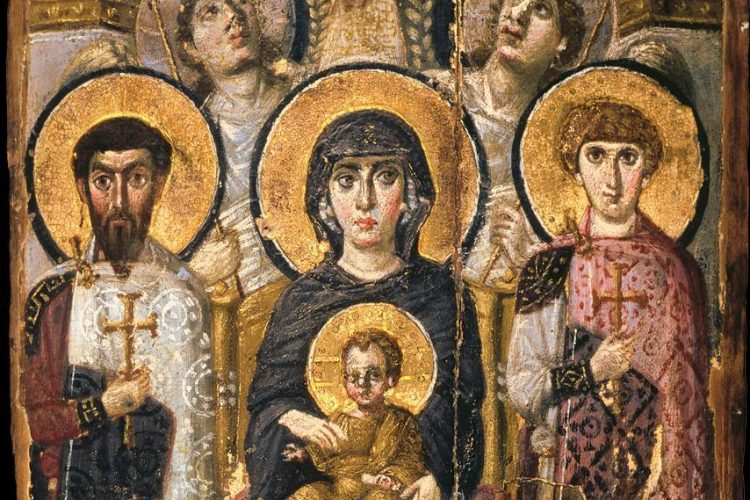 Fall of Byzantium: Dilemma #1 – The Regency

Andronicus III died in May 1341 after an energetic and largely successful reign of thirteen years. Although he had lost nearly all of Asia, he more than made up for that with his gains in Europe. The empire was bigger, richer, and stronger than it had been when he assumed the throne. One notable failure, however, was his neglect of a succession plan. Dying after a short illness, he did not specify a regent. As things stood, there were several candidates for the job.

The most obvious choice was John Cantacuzenus. He was by far the most competent official to run the empire, having effectively been second-in-command of the empire for thirteen years. Andronicus had even offered to make him co-emperor on several occasions, although the latter averred. Many assumed that he would take the role.

The next obvious candidate was the Empress Anna of Savoy. As the heir’s mother, she could make a strong appeal to the Byzantine tradition of giving the regency to the empress dowager. She had always mistrusted John Cantacuzenus—he had too much influence over her late husband, in her eyes—which was reason enough to oppose his candidacy.

The Patriarch of Constantinople, John XIV, was a third possibility. He cited precedent from past occasions, when Adronicus had appointed him regent during absences from Constantinople. The patriarch also disliked Cantacuzenus and together with the empress opposed the Grand Domestic.

John Cantacuzenus would face a series of extremely difficult decisions over the next thirteen years. Like Hercules, he would undergo a series of impossible labors that would define his career. Unlike that more famous Greek, his would number a demonic six and would meet with considerably less success.

The crisis of regency was the first dilemma. What was Cantacuzenus to do? If he did not strongly press his case, he risked losing all influence. At such a dangerous time for the empire, military matters were of paramount importance, and as Byzantium’s most capable general he needed to take charge. Could he allow the reins of government to fall into the hands of a woman and a man of the church?

On the other hand, he had many enemies. Both the empress and patriarch mistrusted him, and he had many political opponents besides. If he moved too impetuously, he risked provoking open conflict. Cantacuzenus was a cautious man and opted for the less bold, but no less risky, decision to cooperate with the empress dowager and patriarch. This ultimately ensured the worst of both worlds.

The major actors were initially able to reach a working understanding. John took effective leadership of the regency, but decisions were reached largely by consensus. Mutual mistrust and difference of opinion caused occasional angry flare-ups, but both sides were willing to work around this. More ominous were the clashes between their respective supporters, which each struggled to restrain.

Unfortunately to this uncertain arrangement was added another character, a friend and protégé of Cantacuzenus by the name of Alexius Apocaucus. Alexius had risen through the ranks on the recommendation of Cantacuzenus himself—the late emperor had misgivings about him, but deferred to his reliable lieutenant’s judgment. At the time of Andronicus’ death, Alexius was head of the navy, civil service, and fiscal apparatus; his ambitions reached still further.

Alexius urged John to simply seize power, imprison the imperial family, and declare himself emperor. When he failed to sway him, he devised a plot on his own to kidnap the young John Palaeologus and effect a coup. His plans were quickly uncovered, prompting him to flee to his fortified villa, closely pursued by imperial troops who besieged him there. Cantacuzenus was evidently in desperate need of men of talent, and convinced the empress dowager that Alexius should be pardoned. She gave her reluctant consent, and John duly released him; John then continued on to Thrace to prepare for an upcoming campaign, while Alexius returned to the capital.

Back in Constantinople, Alexius began a campaign of malicious gossip. He owed his career to John Cantacuzenus, but rather than gratefully return the favor, he used this fact to shift the blame for his own treachery. He whispered to Anna that the Grand Domestic had ambitions to replace her son on the throne. He told the patriarch that John was planning to depose him and replace him with a rival. The empress and patriarch, already mistrustful of Cantacuzenus, were only too ready to believe him. Thus Alexius managed to covertly replace his former patron in the regency, as the three plotted what to do next.

This new faction reflected a growing rift in Byzantine society. All three were outsiders: Anna was both a foreigner and a woman; Patriarch John was a man of the church from a humble background; and Alexius was not an aristocrat, but had risen through the ranks. The support for these three came from largely from the imperial bureaucracy and the mercantile classes, who resented the landed aristocracy, the traditional holders of power in Byzantine society. This made the regency particularly strong in Constantinople, inhabited mostly by merchants and men of the imperial administration.

Added to this volatile mix was an ongoing religious controversy. The practice of Hesychasm, an ascetic form of prayer, had spread through the empire in recent years, polarizing the church. Hesychasm represented a more mystical strain of Christianity—more “true” Orthodox—than the legalism favored by its opponents, more characteristic of the Latin Church. This in turn entangled the matter with the debate over reconciliation with Rome. There had been sporadic attempts to reconcile the Orthodox and Catholic Churches ever since they had split in 1054. Immediately following the recovery of Constantinople, Emperor Michael VIII had tried to bring the two into union as a means of getting western military aid. This was deeply unpopular in court circles and was rejected by his successors.

Against this background, two loose coalitions formed. One was aristocratic, anti-Western, pro-Hesychast; the other, formed of the bureaucracy and merchants, was anti-Hesychast and favored reconciliation with Rome. Agreement within each coalition was by no means perfect on all issues, but they provided broad pools from which each side would draw support in the brewing conflict. A strong emperor such as Andronicus III could keep a lid on such tensions. Just days before his death, he convened a synod to settle the question of Hesychasm. The council found it to be orthodox, and Patriarch John, though himself an opponent, confirmed these conclusions. When Andronicus died days later, however, the conflict quickly bubbled up again.

The social fabric of the empire in such a state, palace politics were even more delicate. Alexius Apocaucus’ poisonous gossip had its intended effect and turned the empress and patriarch bitterly against Cantacuzenus. What was to come next was a conflagration of an intensity unexpected by anyone involved.

It is true that what followed was caused by individual acts of folly and lapses of judgment. All three of the main actors trusted Apocaucus too much, and the patriarch and empress dowager were too willing to use his accusations to reinforce their own suspicions. But this unbridgeable gap opened from an existing rift. It was not just individual personalities, but entire sections of Byzantine society that were turned against one another. The old order had been eroded, and all it took was a period of instability for this to become evident. The turbulence that allowed strivers like Apocaucus to flourish had also dissolved the bonds that held Byzantine society together.

John Cantacuzenus left the capital in September 1341 to prepare the army to continue Andronicus’ conquests. In October, the plotters struck. John was stripped of his titles, excommunicated, and declared outlaw. His friends and family in Constantinople were hounded from the city or imprisoned, all their property seized. What followed would shake the empire to its foundations.