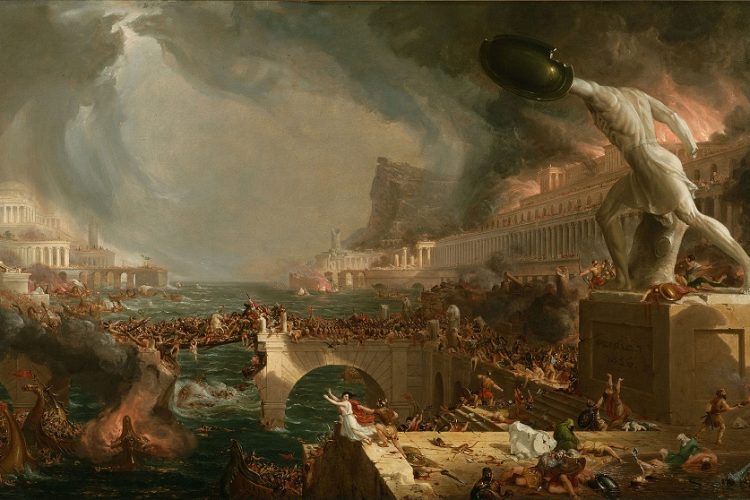 Fall of Byzantium: The Slow Death of Empire

Imagine a man tumbling down a steep, rocky mountain. He might have so much control as to slide left or roll right. Perhaps he could aim for the flattish, gravelly stretch right before the precipice; or, he could continue down the hard-packed slope. But whatever choice he makes, his destiny is out of his hands. Every decision he makes can only determine what particular flavor of disaster he will encounter next, what new set of bad choices he must choose from.

Such was the plight of Byzantium in the last two centuries of its existence. The empire lay completely at the mercy of external forces: powerful enemies encroached from every cardinal direction as one-off disasters—earthquakes, plague, ravaging hordes—struck at the most inopportune moments. Troops were few and the treasury was empty, while internal divisions made a united front impossible. The empire staggered from one crisis to another as its position steadily corroded—its destiny was truly out of its own hands. The fall of Byzantium seemed imminent.

The empire had been on this desperate plunge since 1204, when the Fourth Crusade sacked Constantinople and forced the imperial court into exile for 57 years. Byzantium had endured many harrowing crises up to that point, but was always saved by some man of genius, a savior emperor along the lines of Heraclius or Alexius Comnenus, who could pull it back from the precipice.

No such man appeared to rescue Byzantium in its last days. The problems were too great, too numerous, and too fundamental. Collapse took a long time in an empire as rich and mighty as Byzantium—two centuries between the recovery of Constantinople and the fall of the same to the Turks—and there were many ups and downs along the way; at times it seemed as if a substantial recovery was even likely. But the inexorable logic of decline prevailed. Dilemma after dilemma put the empire in a steadily worsening position.

This fundamental problem is best understood by looking at the reign of John VI Cantacuzenus, one of the most significant emperors of the period. When John came to power in 1347, he had already spent several decades at the highest levels of imperial administration. He was head of the army and civil service, and right-hand man to the reigning emperor, during which time he participated in two civil wars and saw the loss of much Byzantine territory in Asia. As emperor, he fought two short wars with Genoa, lost even more territory in Europe and Asia, and fought a third civil war in which he was deposed.

If John’s record was grim, he was nevertheless one of the most competent emperors of the period. A close look at his decisions shows him to be as wise as could be hoped for, illustrating the awful predicament. Such were the straits the empire found itself in that one of its most able and honest men had such a disastrous reign.

This is the first of a series of posts that will explore the reign of John Cantacuzenus in detail, and how the eventual fall of Byzantium was made inevitable by the dilemmas he faced. First, it is worth considering what put the empire in such a terrible position to begin with. Tomorrow, we will look at the Fourth Crusade and its aftermath, which set Byzantium on the path of destruction.

All posts in the series: