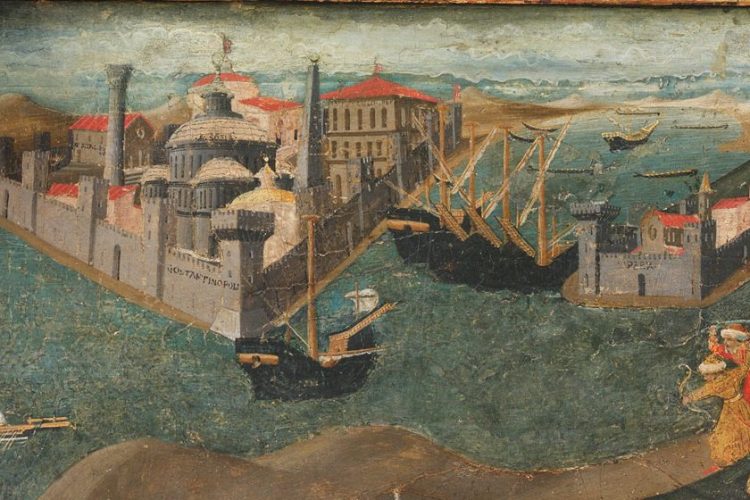 Constantinople had suffered much over the past century and a half. The Fourth Crusade, Latin rule, and the recent war had taken a huge toll on the city. The capital was densely packed with refugees and the population weakened by hunger. So when the Black Death struck in May of 1347, the death toll was horrific. Like a match on dry tinder, the first few cases spread to engulf the entire city. One chronicler claimed that Constantinople alone lost eight ninths of its population. Commerce ground to a halt and agriculture was disrupted.

In the aftermath of this calamity, another problem was brewing. Byzantium had long been squeezed by the two great Italian maritime republics of the day, Venice and Genoa. Since the Nicaean exile it had been forced to rely on one or the other of the two cities for naval aid. Both were rapacious and would squeeze whatever they could when it held the advantage. In recent decades, it had been Genoa’s turn to profit.

The Byzantines had granted the Genoese generous terms in return for their help recovering Constantinople, including possession of Galata, a town across the Golden Horn from Constantinople. This was much more than was usually granted in trade concessions of the time. In typical arrangements, a foreign power would receive a neighborhood: typically several houses, a church, and a square in which to conduct business. Such was the arrangement both Genoa and Venice enjoyed prior to the Fourth Crusade.

The new Byzantine-Genoese treaty gave Galata as a trade colony more in the style of later European colonialism. The Genoese fully controlled the harbor and were allowed to collect customs dues on all shipping passing through. Shrewd businessmen that they were, they set their rates below those at Constantinople, so nearly all trade passing through the Bosphorus stopped at Galata instead of the capital. Needless to say, this siphoned huge sums from the imperial treasury—for every hyperpyron received at the customs house in Constantinople, seven were collected in Galata.

This was a serious problem for John Cantacuzenus. The empire was already deeply in debt from the war and further immiserated by the effects of the Black Death. Thrace, the most productive land in the empire, had been so badly ravaged during the civil war that many of its most fertile tracts abandoned. The Serbian king Stefan Dušan was still in the field against the empire, threatening Thessalonica, while rogue bands of Turks raided across the Bosphorus and other predators circled. John desperately needed money. He would have to lure traffic back to the ports of Constantinople by lowering duties.

There were risks to such a move. It would anger Genoa, likely prompting them to refuse to cooperate with the Byzantines on commercial matters. Constantinople depended on food delivered to the city in Genoese ships, meaning that John would need to build his own merchant fleet. As merchant ships could easily be converted into military vessels, this would threaten Galata’s independence. The Genoese would therefore need to build up the fortifications around their colony to protect against an attack.

The Genoese had in fact already begun trying to reinforce their position at Galata. They had requested permission to build on the high ground behind the town, claiming the need for extra space. In reality, this was a pretext to expand their fortifications—this was the exact location that they would later build the famous Galata Tower, which still stands in modern Istanbul. Cantacuzenus saw through their designs and refused. If anything, this deception accelerated his timeline: by the summer of 1348 he raised enormous loans and began constructing a fleet at Constantinople.

Everything was ripe for an escalating series of maneuvers. A similar pattern of conflict had occurred during the reign of Andronicus III, who had tried to rebuild the Byzantine navy in a similarly tense atmosphere. A dispute subsequently arose over several islands in the Aegean which had been granted to Genoa as a fief. Claiming that the Genoese were in violation of the terms of their lease, Andronicus assembled a fleet and retook the islands. A group of Genoese adventurers then reconquered the islands; their countrymen in Galata, fearing retribution, expanded the fortifications around their settlement. Andronicus reconquered the islands once again and compelled the Genoese to tear down their fortifications at Galata.

The empire was much stronger then, just twenty years before; Byzantium was now in no position to dictate terms. If it came to open conflict now and the Genoese won, Constantinople would be left ripe for the picking. What would stop them from doing what their Venetian rivals had done in 1204? The capture of Constantinople would give the Genoese a nigh-impregnable fortress guarding their valuable Black Sea commerce—the temptation would be too hard to pass up. Even if they could not take the walls, they would be able to starve the city by simply stopping grain shipments from the Black Sea.

And if Byzantium won? They might be able to subdue the Genoese in Galata, but they would still be far outmatched at sea. The Genoese would want revenge, and would be free to take it at their leisure. At the very least, they would seize Greek cities and islands across the Aegean. But those would be problems for another day. Cash was simply too short, and there was only one way to get more of it. That summer, Cantacuzenus lowered tariffs and raised loans to begin building a small fleet.

By pure happenstance, the war ended up as well as could be hoped for Byzantium. It was a tense summer as the Byzantines built their fleet while the Genoese fortified Galata in contravention of their agreement. The latter attempted to negotiate some settlement on the question of customs duties, but Cantacuzenus refused to budge. Seeing the direction things were headed, the Genoese initiated hostilities by burning all Byzantine ships at anchor in the harbor. They then subjected the walls of Constantinople to a harrowing bombardment from the sea and attempted to take the walls. This rallied the spirits of the people as young and old alike mobbed the walls to repel the attackers.

The ferocity and suddenness of the Genoese attack shocked the Byzantines to such an extent that Cantacuzenus was able to compel more loans for the construction of a new fleet. Early in 1349 the ships were ready to sail. Plans were drawn up for the army to besiege Galata as the fleet attacked by sea. Byzantium had not had a real navy for several generations, and seamanship was poor. As the fleet rounded the headlands of Constantinople to cross the Golden Horn, a gale struck. Already nervous about the impending attack, the inexperienced sailors panicked and jumped overboard en masse. Those that did not immediately drown were carried by the current to the Galata shore, were they were cut down wholesale. Watching this disaster unfold, the land force lost heart and abandoned the siege. Delivered such a miracle, the Genoese were exultant and prepared to press their advantage.

At that exact moment, a ship arrived that saved the Byzantines from total disaster. On board were plenipotentiaries sent from Genoa to negotiate a treaty. Coming at the matter from a greater distance, these ambassadors took a cooler view of things. If they imposed harsh terms, the Byzantines would be burning for revenge and would likely turn to Venice for help. That would imperil not only Genoa’s position at Galata, but their entire Black Sea trade. The Galatans had indeed been in violation of their treaty when they fortified their colony; and as the Byzantine attempt to capture Galata had failed, Genoa’s pride did not require satisfaction.

Above all else, war was bad for business, so Genoa agreed to favorable terms. They would pay a sizeable indemnity and accept the lower tariffs in Constantinople; in addition, they would cease work fortifying Galata and vacate the lands they had illegally occupied beyond the walls. In a subsequent agreement, the Genoese agreed to return the island of Chios, which they had seized during the civil war (and one of the islands they had fought over with Andronicus), in ten years, and would in the meantime pay rent on it.

Of all the dilemmas John Cantacuzenus had faced so far, his decision precipitating the Galata War turned out the best. Byzantium had been hopelessly incompetent in their execution, yet by good luck had still come out ahead. It was no cause for celebration though. An improbable victory with a small payoff, balanced against the alternative prospects of disastrous defeat or slow financial squeeze, the outcome showed just how bad Byzantium’s prospects were.