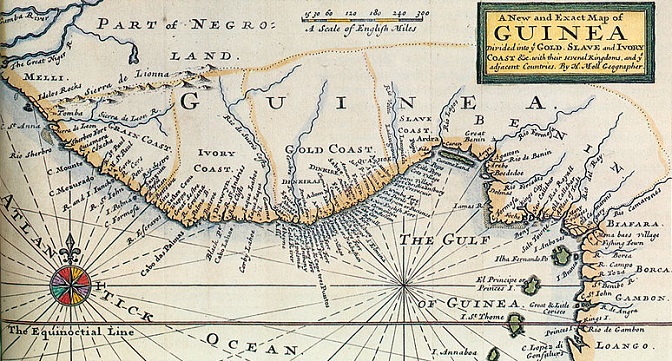 Between the Senegal River and modern Liberia lies a marshy, tropical coastline that is one of the most densely-populated in Africa.  Early Portuguese explorers noted its agricultural productivity, and the region came to be called the “Grain Coast” for its surplus of rice and millet.  The Portuguese quickly set up trade posts here to provision their expeditions further south, initiating regular contact between Europeans and Africans.

Travelers from Europe observed a number of different methods of rice cultivation.  In the upriver areas, farmers would plant in the rich soil on the riverbank after seasonal floodwaters retreated.  In marshy lowlands, farmers grew seedlings around their villages before transplanting them to swamps enclosed by berms to trap rainfall.  Most sophisticated of all was in the estuaries, where some villages constructed complex hydraulic systems of levees, reservoirs, and drains on cleared mangrove swamps.  Before planting, fields would be flooded with fresh water to kill weeds and to desalinate the soil.  The levees kept the salt water out during high tide, while flooded fields could be drained at low tide.

Among these sophisticated rice farmers were ancestors to the modern people known as Gullah.  Living on the coastal plains and islands of South Carolina and Georgia, the Gullah maintain the most distinctively African culture of all American blacks.  Their speech, crafts, and customs bear the strong mark of their ancestors, owing to a fortuitous combination of geography, economics, and history.  But above all else, it was their cultivation of rice that allowed the Gullah to maintain their heritage. African slaves were first brought to the New World for their ability to survive the brutal working conditions in the most economically valuable regions.  Indentured servants from Europe had trouble adapting to the heat and diseases of the tropics, such as malaria, while natives in turn were killed off by diseases the Europeans brought.  The Grain Coast came to be a major source of slaves, and its inhabitants were shipped to the sugarcane fields of the Caribbean and Brazil, and later to the tobacco and cotton fields of the American South.

The founding of Charleston in 1670 initiated an influx of African slaves to the Carolina Colony, where cotton and tobacco were originally the major cash crops.  These crops required high-quality soil that was watered by rain, so some slaves were granted parcels of the marginal, swampy land on the edges of plantations, which allowed them to raise crops for their own sustenance.  For the slaves from the Grain Coast, this was as close to their native environment as anything in the New World, and they used the familiar terrain to grow familiar crops such as rice.  Their owners took notice and began growing rice themselves, so that the colony was exporting the crop by the end of the 17th century, and had made rice its biggest source of revenue by the middle of the 18th.

Large-scale rice cultivation gave rise to the task system of slave labor, unique in the Americas.  Rather than being forced to work a certain number of hours per day, slaves were assigned tasks to be completed within a given day.  This allowed them more autonomy, and efficient crews had more time to cultivate their own crops.  In the planters’ eyes, there were several advantages to this.  It reduced the exposure of white supervisors, who were more susceptible to malaria, to the marshy, mosquito-infested fields, and reduced overall supervisory costs.  Most important, it allowed Africans to use their resident knowledge in cultivating rice, recreating in the New World the agricultural methods they had used in the Old.

Over the first few decades of the 18th century, these slaves transformed the landscape of the Carolina and Georgia coast.  Using the same West African methods of embanking fields with berms and installing irrigation and drainage pipes made from hollowed-out tree trunks, they enclosed vast stretches of the marshy coast and tidal swamps.  Planters, chasing the enormous revenues of the rice trade, invested heavily in these fields.  They reinvested most of each year’s profits into more land and slaves, as well as into technical improvements of the irrigation systems, drawing heavily on European innovations, so that by mid-century rice cultivation was essentially industrial-scale agriculture.

Despite the changes in scale and technology of rice cultivation, it remained essentially West African in character.  Everything from planting seeds by covering them with the sole of the foot, to milling the grain with mortars and pestles carved from tree trunks bore the signs of its West African provenance.  Even the winnowing of the grain from the chaff was done using distinctively West African-style coiled baskets made from sweetgrass and bulrush—New World plants used in traditional designs.  Planters developed sophisticated mechanisms for opening and closing the channels that watered and drained fields, but the overall scheme remained essentially African.

Following the Civil War, the former slaves who were coming to be known as Gullah stayed in the same areas they had long inhabited.  The terrain of the coastal and island swamps kept them relatively isolated, which preserved the distinctive culture their ancestors had brought over from Africa, and they continued to cultivate rice in the manner that gave rise to those traditions in the first place.  In this way they have brought the past into the present, as their ancestors brought the Old World to the New.

Black Rice: The African Origins of Rice Cultivation in the Americas