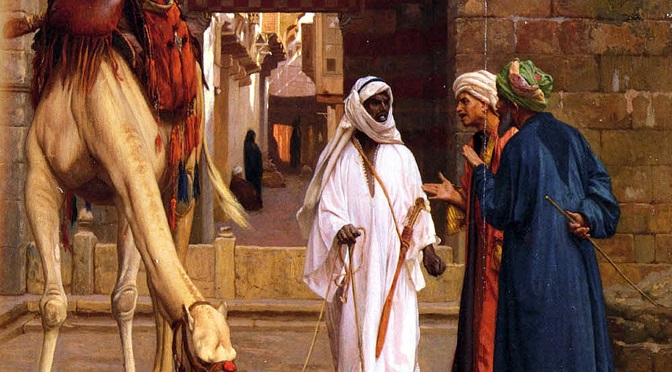 The merchant of centuries ago spent his life enduring monotony and hardship by turns.  Weeks might be spent in the saddle staring at an unchanging landscape, or on the deck of a ship with nothing but open water all around, only to be abruptly set upon by a ferocious storm or an avaricious pack of bandits.  The pendulum swings between boredom and misery were made worse by the constant loneliness of traveling in lands far from home.  Among people foreign in their customs and speech, even basic communication was difficult.

But merchants were above all practical people.  Having traveled hundreds or thousands of miles in pursuit of profits, they worked out ways to communicate with suppliers at the end of the journey.  At first speaking an ungrammatical mishmash of both parties’ native language, over time they would develop a trade language–a tongue few spoke natively, and used only when talking to foreigners.  Because these peculiar idioms drew from several different languages, they tended to arise especially along rivers, deserts, and seas that linked several different cultures.

Also called “lingua francas,” trade languages are best exemplified by the original Lingua Franca, spoken in the Mediterranean from the Middle Ages up into the 19th century.  The name is Italian for “language of the Franks” (referring broadly to all Western Europeans), and traces back to when Genoa and Venice were the great trading powers of the Mediterranean.  These two cities had established footholds in the eastern Mediterranean during the Crusades, when they transported men and supplies to the Holy Land in exchange for grants of territory and trading privileges in major port cities.  During the following centuries, the wily agents of the merchant republics managed to weather enormous political turmoil as Arab rulers expelled the Crusaders, the Ottomans conquered Byzantium, and allegiances within the region’s convoluted web of petty princedoms constantly shifted.  Tenacious merchants and sailors conducted their business in the East using a stripped-down Italian dialect increasingly infused with loan words from Greek, Arabic, and Turkish, along with other Romance languages.

By the 16th century, at the height of the Ottoman Empire, Lingua Franca had established itself as the language of foreign commerce in Turkish-controlled ports around the Mediterranean.  Spanish-infused versions proliferated in North African coastal cities, while the original Italian-based idiom was common in Egypt, the Levant, and Turkey.  European sailors, travelers, and diplomats picked up this adaptable idiom as a relatively easy way to communicate with locals.  Lingua Franca only disappeared in the 19th century as standardized European languages–especially French–replaced the informal and eccentric trade language.

The English established their first Chinese trading post in 1664 at Canton, then the only port in China where foreign merchants were allowed to do business.  The local merchants who dealt with them learned many English words, but kept distinctly Cantonese grammar (the phrase “long time no see” may be such a surviving example), creating their own trade language.  This “pidgin English” spread to other Cantonese-speaking cities, eventually reaching as far as Shanghai after its occupation by the British in the First Opium War.  Further European colonization and the opening of China to the outside world caused pidgin English to drop in prestige and gradually disappear, as Chinese businessmen preferred to learn formal English.

There are many examples of tongues that served as trade languages, even though they were fully developed languages in their own right.  The spectacular success of Arabic following the Islamic conquests was aided by the fact that it united desert-borne merchants over a vast area.  Both settled and nomadic traders could travel from the Atlantic coast of Africa  up to Iraq’s border with Persia knowing only one language.  Although Arabic came to be the native language of almost everyone in these lands, it began as the language that Syrians, Copts, Berbers, and others under the Islamic Caliphate used to communicate with outside groups.

Similar to the spread of Arabic was the rise of Swahili in East Africa.  It was originally spoken by Bantu pastoralists who expanded from the African Great Lakes region and reached the eastern African coast by the 8th century.   They quickly dominated the region politically and economically, so much so that the littoral from Kenya down to northern Mozambique came to be known as the Swahili Coast.  The kingdoms they established controlled the trade with Arab and Persian merchants, who by this time were establishing trade colonies on the islands off the coast such as Zanzibar and the Comoros.  Swahili became the trade language for all commerce between the coast and the interior, facilitating the exchange of slaves, ivory, and gold for foreign pottery and textiles.  Even today, with some 15 million native speakers, Swahili is spoken by nearly a hundred million more who use it for everyday business.

English is similarly native to roughly 400 million speakers, but spoken by over a billion people total, a legacy left by the British Empire on all six of the world’s inhabited continents.  It is common today, especially in Europe and Asia, for business meetings held in English to be attended entirely by non-native speakers, effectively making it a trade language.  As global business demands increasingly efficient communication, the English language is being firmly entrenched as the worldwide lingua franca of the 21st century.