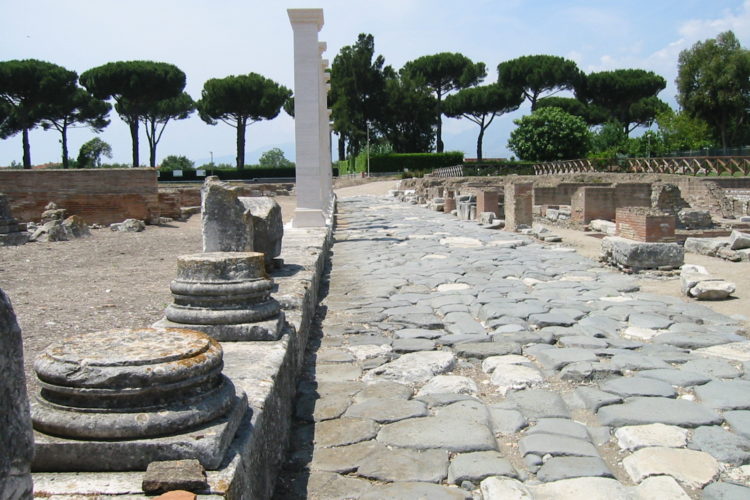 A 55-kilometer stretch of an ancient Roman road has been discovered in western Turkey. The road connected Smyrna (modern Izmir) on the coast with Manisa, an inland town. An archaeologist working on the project observed:

It is noteworthy that the road is as solid as the first day it was built. Our examination showed that large water discharge channels were constructed under the road to prevent possible flash floods. In addition, we noticed that engravings were carved upon the stone plating to prevent horses from slipping during winter.

The sophistication of the engineering highlights just how good Roman road infrastructure was at the height of the empire. Famous roads such as the Appian or Emilian Way carried legions rapidly through the provinces, and facilitated the commerce that sustained the empire.

Building on the Back of Giants

The Romans were not the first to maintain an extensive highway network. The Achaemenid Persians built royal roads in the 5th century BC that stretched thousands of miles across their empire. On the western portion, a courier could travel 1,677 miles from Susa, one of the Achaemenid capitals, to Sardis, near Smyrna, in just 7 days. The incredible system allowed Persian rulers to project power and maintain close control over distant satrapies. So good were the roads, that they were used up until Roman times.

As Rome expanded across the Mediterranean, it incorporated many such highways into its own network. In most cases, however, Roman roads were mere paths that were subsequently paved and widened. When legions marched into new territories, a corps of engineers would accompany them to improve such roads, allowing rapid access back to the capital.

All Roads Lead to Rome

At its height, the Roman empire had over 50,000 miles of paved roads, with another 200,000 miles of unpaved roads. This network brought a cultural, civic, and economic unity that would otherwise be impossible.

Rome was chiefly a Mediterranean empire, and it was that sea that facilitated most of its transportation. However, it was the advanced and far-reaching Roman road system that brought the Balkans, northern Europe, and the interior of Asia Minor into Rome’s orbit. Many of these roads lasted thousands of years after their initial construction, and even defined the course of modern highways. In more ways than one, they brought a Roman legacy to those lands that persists today.