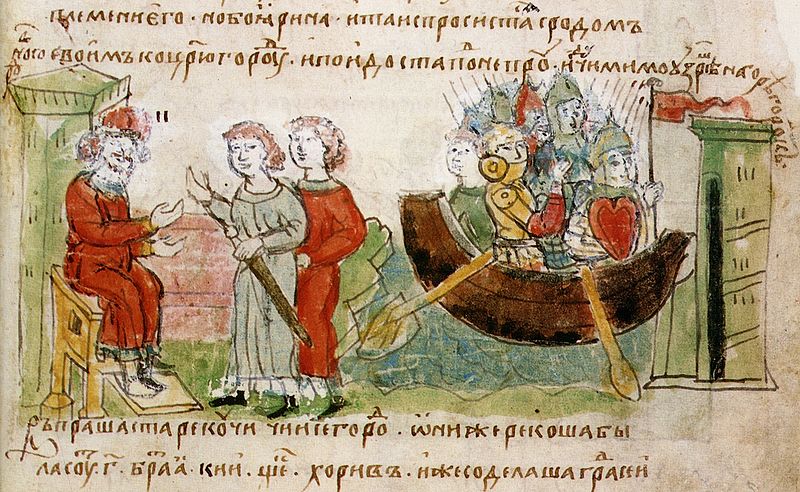 Sometime in 862, a man by the name of Riurik first set foot in the land we now call Russia. His ancestors had long feuded with the natives of the land, but he came in peace. Indeed, he was invited by the lords of the indigenous people to come rule over them, as a foreign king, so that his impartial justice could put an end to their domestic squabbles.

So says the Primary Chronicle, the first Russian history, written in the 12th century. The united Russian states went on to enjoy a prosperity they had never before seen, and would not see again for centuries. The skein of navigable rivers that ran across it carried trade from Scandinavia to Byzantium; the vast, northern forests provided wax, amber, and furs for export; the peasants gained a respite from incessant raids and feuding.

Another William Crosses the Channel

When England invited William and Mary to occupy the throne in 1688, it was solving the same problem in the exact same manner. The country had been deeply divided for much of the past century between a monarchist faction whose strongest champions were Catholic sympathizers, and the Puritan-led Parliamentarians. Parliament’s victory in the vicious Civil War, then the monarchical victory of the Restoration left more discontented than not. Only bloody suppression could see one faction triumph over the other, yet neither was well-loved enough to maintain the support of the people through such a violent purge.

England, which was involuntarily subjected to a foreign king in William the Conqueror, saw the growth of the country’s defining institutions under centuries Norman and Angevin kings; it knew well the advantages a ruler from overseas could bring. Placing the country under William of Orange (the first three English kings named William were all foreign-born) finally brought peace. He was largely acceptable to most: his native Holland had a similar liberal tradition to England, he conformed to the majority by joining the Church of England, and yet he was foreign enough to lack those features that would have distinguished him as one or another bitter faction (this last was essential in a land that loved the licentiousness of Jacobite London, yet could not tolerate the vaguest whiff of Popery).

Two countries in the 19th century were interesting exceptions that added a twist to the logic of inviting foreign kings to rule. Greece and Bulgaria, both of which won freedom from Turkey during the course of the century, invited German princes to rule them. The recent experience of liberation had united these countries like never before. But five centuries of Ottoman rule had erased any base of power that could seriously threaten the sultan’s authority. There were no princes even in name who could step up to assume power: any remnant of their respective royal families had long since been swept away.

The experience of Bulgaria and Greece were not too different from feudal states in the Middle Ages, when “professional ruling class” families like the Luxemburgs, Jagiellons, or Habsburgs would be invited into sovereign territories to provide a prince that was acceptable to both the people and the neighboring states. Indeed, importing foreign kings did several things for these newly-independent countries: it gained them some legitimacy in the European powers’ eyes; it tied them to European royalty, thus providing a measure of protection against the threat of an irredentist Ottoman resurgence; and it gave them a ruling class that had some familiarity with how modern countries were run. Both Greece and Bulgaria saw many upheavals and crises in the following decades, but they likewise survived the 19th century intact as the nation-states that exist today.

Into the Age of Democracy

A thousand years after Riurik accepted the invitation to rule, a collection of steel magnates and financiers gathered in New York City. Competition between Andrew Carnegie’s steel behemoth and several smaller producers was gutting the industry. Carnegie tried to squash his competitors by throwing his weight around, while the relentless attacks by the smaller dogs ruthlessly cut into Carnegie’s profits.

The end of the quarrel came in the person of J.P. Morgan. The legendary financier bought out majority stakes in all companies involved to form a giant trust that, at its peak, would produce two-thirds of American steel. In 1901, the United States Steel Corporation was born, making all involved fantastically rich. Thus even the princes of industry saw fit on occasion to summon a sovereign from the foreign lands of finance.

History is littered with the stories of countries that have bled themselves to death through internecine conflict. But from time to time when the balance of power was firmly set, men have seen with great clarity just how entrenched all sides were. Neither strong enough to vanquish their rivals, nor so weak as to be prey, they recognized their endless feuding could only come at great cost with little gain. And with this foreknowledge, they summoned a Leviathan from far-off depths to suppress the brutality native to human nature.